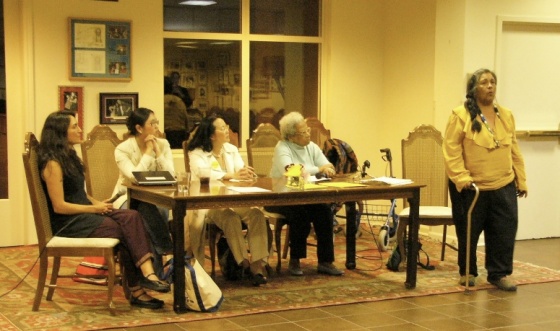 Continuing WIN and CAWA’s missions to give all women a voice, particularly our sisters who have not had a forum for their voices,  WIN held an energizing and thought provoking SPEAKOUT on October 7, 2008 at Delancey Street Club Room with MARCUS BOOKS, as part of our Get Out the Vote campaign.  Panelists were Dr. Raye Richardson, Founder/Owner MARCUS BOOKS;  Irene Lu, US Representative Afghan Women’s Network and WIN Board of Directors;  Junie Mattice, Tolowa;  Alicia Wang, Candidate for San FRancisco County Supervisor, Dist. 1; and MC Rose Aguilar, Author and Host of ‘Your Call’ on KALW.
Junie Mattice spoke passionately about Human Rights and the Indigenous people of California. You can read her remarks here:

First I SANG MY WAR SONG… then said:
I am Junie Mattice, a citizen of Tolowa Nation and of the United States , and I have no Human Rights.  Why a war song?  For our husbands, brothers and sons who have lost their path, for battered women and abused children.  All of you, everyone has a healing song passed down by your ancestors.
We all have a culture, this is no melting pot.  We women are the life givers in this country of Euro thought, dominated by man.  This progress of Euro thought created this cement world, a world defying Mother Earth.
Your mothers and grandmothers have retained your ancestor’s culture thru your homes.  The kitchen, cupboards and foods show this culture.
In 500 years of progress, 5 million American Indians have been murdered.  Where is our Holocaust Museum ?  In 1992 the United States Congress did a 7 year study of the California Indian Genocide and documented all and 90,000 plus Non-Federally Recognized California Indians have no Human Rights.  No Rights of Freedom of Religion, rights to protect ancient village sites, sacred sites, cemeteries and massacre graves.  Del Norte County census in 1910 stated only 120 of us Tolowa were left.
Capitalism is okay, greed is not.  Change is good.  We need to change all of our Representatives; Representatives who don’t believe in family first.  We women are the core infrastructure of California .
Environmentalists don’t believe in American Indian sovereignty.  They want to develop people corridors and animal corridors on a fast tract to nirvana.  I say, “Let them introduce grizzly bears to Los Angeles .”
All that is left for American Indians is song and prayer.  With your help of collective prayer we can turn the tide of mans greed.  Power thru collective prayer and voting.  A cousin told me to “Pray for evil to leave your home.”  It works.  Voting works too.
The American Indian is the original “steward” of the land, and then Spain came and destroyed the people of California .  This destruction was continued by the over Landers greed for gold, land, otters, trees, fish, elk, deer, bear, ad nauseaum.
The 1st convention of California was built on “… a thousand drinks and a thousand payoffs…”  Thus the Spanish, Mexicans and over Landers divided “free” lands and created California .  This creation ignored 15,000 plus years of American Indian culture with knowledge of plants, medicine and Mother Earths needs.
California Indians were forcibly rounded up, numbered, deloused, marched, shipped, hair cut, religion and dress denied and language all outlawed.  General John Bidwell and John Sutter created the Indentured Law that placed us into the hands of any Whiteman.  We became the slave trade and 12 year old brides.  We were still indentured after the Emancipation Proclamation that freed the black people.  Even Treaties signed under these conditions have never been honored.
The 1st Governor, Peter Burnett declared, “…a total eradication of nations…”  They cut up pieces of land, shaped and reshaped to the highest bidder.  A surrealistic checkerboard of existence they created for all of us, and with no stable infrastructure.
California is named after a legend of warrior like women, they called Amazon.  This is your legacy; we are the women warriors of today.  We have to stand up and demand to be counted as equals.
This greedy, controlling society is so paranoid, they will try to steal the Presidency again…as California women warriors we cannot let this happen.
Dominate Euro mans thought created this cement society and is the perfect example of “Skinners Rats.”  Thank God women know how to nest.  We have been able to nest under major changes throughout history and survive under any conditions.  But now we need to leave our nests and change our Representation and recreate California using “Honor, common sense and give our children the best education we can.
Let us women drop a pebble into water and create a life of Honor, common sense and education for our children, the rings we create will travel these lands and turn the tide of greed.
Thank you,
Junie Mattice

One thought on “Junie Mattice speaks out!”

Error: Twitter did not respond. Please wait a few minutes and refresh this page.